Of Men is the twelfth chapter of the Quenta Silmarillion section within The Silmarillion. 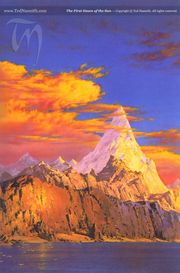 The first dawn of the Sun by Ted Nasmith

The Valar turned their attention away from Middle-earth after creating the Sun and Moon. Ulmo only would still actively intervene on behalf of the exiled Noldor. The Sun had an awakening effect on Middle-earth, rousing animals and plants from the Sleep of Yavanna. The Years of the Sun were swifter and reckoned shorter than the Years of the Trees. The Sun had one more effect: awakening the secondborn Children of Ilúvatar, known as Men, or Atani, which means followers, in the Elvish tongue.

The first Men awoke in Hildórien, but none of the Valar were there to guide them. For a time, the fathers of Men had joy in the discovery of new things and of their new life. They would eventually find the Avari, those Elves who had not went on the Great Journey. These Elves taught Men the first of their crafts and languages.

Nonetheless, though they had many similarities, Elves and Men were different than each other. Elves were immortal, but tied to the fate of the world. They were doomed to remain on Arda, remaining until the end of the world for better or for worse. Men were in Arda for only a brief time before they would leave the circles of the world, for they had the Gift of Ilúvatar that meant they would eventually die and be released.

Eventually, Elves would fade from the world, becoming little more than phantoms or shades. Men, on the other hand, would obtain dominion over the world, even after the Elves fade away. In the meantime, however, certain men would go west and eventually ally with the Noldor in their futile struggle against the dark power...