Of the Beginning of Days

Of the Beginning of Days

Of the Beginning of Days is the first chapter of the Quenta Silmarillion section within The Silmarillion. 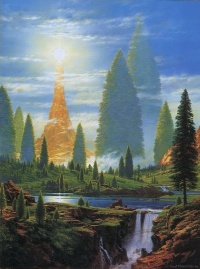 Following the entrance of the Ainur as the Valar, Arda was still lifeless and had no distinct geographical features. The initial shape of Arda, chosen by the Valar, was of a symmetrical continent lit by two lamps: Illuin and Ormal; one in the continent's north, and one in the south. The lamps illuminated all the Earth and both lights mixed in the centre, in the Valar's dwelling: the isle Almaren in the middle of the Great Lake. However the lamps were destroyed by the vicious Melkor. The Spring of Arda ended and the world was again darkened, and the lamps' fall spoilt the perfect symmetry of Arda's surface. Two main continents were created that concern the story: Aman on the far West, and Middle-earth to the East, both separated by the Great Sea.

Following this, Melkor hid himself from the Valar in an enormous fortress he built in the north of Middle-earth: Utumno. He also surrounded himself with horrible beasts, many of them Maiar in the form of fell animals, known as Balrogs. Balrogs were to remain his most faithful servants and soldiers ever after.

The Valar then made for themselves a home at the utmost West, in Aman. The chapter concludes with the description of Valinor, the creation of the Two Trees and the roles of the Valar, similar to the Valaquenta.