The Valar strengthend the watch on the northern borders of Aman after Melkor fled, thinking he would go back to his old domain in the north of Middle-earth where the ruins of Utumno were. However, in truth he went south to the dark region of Avathar to seek out his former minion Ungoliant. A creature in the shape of a massive spider, Ungoliant both hated and desired the light of Aman, and so made her dwelling in Avathar. Melkor persuaded her into helping him take revenge against the Valar. He promised her whatever she wanted in exchange for her help, but he did not intend to fulfill the bargain. 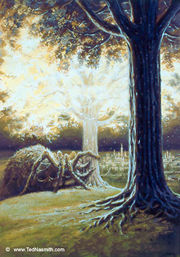 Ungoliant spun her dark webs, creating a way for Melkor to climb to the top of the mountains on the southern border of Valinor. There, they both saw the light of the Two Trees. Using the darkness of Ungoliant to hide from the sight of the Valar, they made their way across the plains towards the trees.

In Valinor, a festival for the gathering of first fruits and offering to Eru was being held. The guard of Valinor was relaxed compared to all other times. The Valar were there, along with the Vanyar and the Noldor who remained in Tirion and did not follow Fëanor. However, of the Noldor who follow Fëanor, only Fëanor himself was present, and he came only at the command of Manwë. Hoping to heal the feud between Fëanor and Fingolfin, Manwë attempted to have them reconcile. Fingolfin released his brother from exile, but Fëanor only half-heartedly returned the sentiment.

At this moment, Melkor struck. He attacked both Trees with his spear, breaking their bark and causing them to bleed sap. Ungoliant then drank the sap of the Trees and poisoned them, withering the Trees and destroying their light. She then also drank the light in the wells of Varda dry, becoming swollen and massive.

A darkness fell upon Valinor, with only Taniquetil being visible. All of Valinor was silenced. Manwë and Varda were the only ones able to see the darkness of Melkor and Ungoliant, who were running away from the Trees. Tulkas, Oromë, and others attempted to chase Melkor, but lost their way in the darkness, which seemed to be all encompassing. Valinor was darkened, the trees and their light destroyed.