Of the Sindar is the tenth chapter of the Quenta Silmarillion section within The Silmarillion. 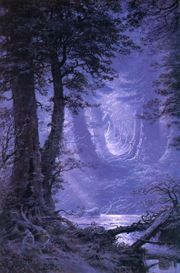 By Moonlight in Neldoreth Forest by Ted Nasmith

During the Chaining of Melkor, those Teleri Elves that set out on the Great Journey but did not go to Valinor settled down in Beleriand. These Elves were called the Sindar, and they were able to live in peace with the absence of Morgoth. Under the lordship of Thingol and Melian, the Elves of Beleriand grew in wisdom and skill. They soon made contact with the Dwarves, or Naugrim as the Elves called them, of Nogrod and Belegost. The Dwarves soon learned the Sindarin language and began trading with the Sindar, though they were not friends so much as allies and trading partners.

Melian warned Thingol that the peace will not last forever, and he asked the Dwarves to make him a secure dwelling place. The Dwarves gladly did this in return for the knowledge of Melian and pearls Thingol obtained from Cirdan. The dwarves soon constructed a vast mansion of caves, which was named Menegroth, the Thousand Caves. Menegroth soon became one of the most beautiful palaces ever created outside of Aman, with both the Elves and Dwarves contributing to the work in a display of cooperation seldom seen in the days ahead. For a time, peace still reigned in Beleriand.

However, dark rumors began to spread soon. The Dwarves informed Thingol that not all of Morgoth's servants were destroyed by the Valar. The Avari in the east were being driven away by evil creatures coming down from the North, where Morgoth once reigned. These evil creatures began to appear in Beleriand, including wolves and foul Orcs. Thingol commissioned the Dwarves to begin making weapons and armour and stored them in his armouries.

There was another elf named Denethor who led his people into Beleriand. These would later be known as the Green Elves. Thingol welcomed them and they dwelt in Ossiriand.

Unfortunately, the peace was not to last, for Morgoth escaped Valinor and returned to Middle-earth. Morgoth rebuilt Angband and unleashed his armies upon Beleriand, attacking Doriath. Thingol called upon Denethor for assistance, and they attacked the Orcs. The armies of the Orcs were routed, but not before they killed Denethor and scattered the Green Elves. Many Green Elves went to live in Thingol's domain.

Melian used her power to create the Girdle of Melian, a protective veil around Doriath that kept out not only Morgoth's forces, but anyone who tried to enter against the will of Melian or Thingol. There was peace within the veil of Doriath, but outside chaos reigned, for Morgoth's forces had overrun Beleriand.

Soon, out of the west, came the white ships bearing Fëanor and the Noldor...