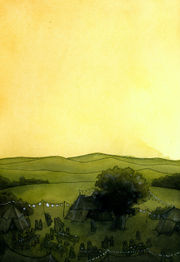 The Party Field was a large field south of Bag End's front door adjacent to Bagshot Row near Hobbiton. It probably belonged to Bilbo Baggins.

In the preparations for Bilbo's 111th birthday party, a special entrance was cut into the bank, and a large white gate and steps connected it to the road, and an open-air kitchen was installed in its north corner, manned with cooks from many inns and taverns of the vicinity.

The field was covered with tents and pavilions; underneath the largest pavilion was a decorated tree that stood at the head of the table, where Bilbo made his farewell speech.[1]

After the destruction of the Party Tree by Sharkey and his Ruffians,[2] Samwise Gamgee planted a mallorn tree, upon his return from the Quest of the Ring[3] and it blossomed on 6 April T.A. 3020[4] Afterwards it was used for holidays and celebrations by the Hobbits of that region.

Retrieved from "http://tolkiengateway.net/wiki/Party_Field"
Categories: Fields, plains and deserts | The Shire