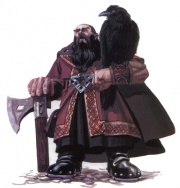 Ravens were large black birds,[1] associated with ill news of death,[2] and were known for their harsh voices.[3]

The intelligent ravens of Ravenhill near Erebor, could live to a great age and some could even speak Westron and were friendly with the Dwarves of Erebor. Carc had been one of these, and his son Roäc was the leader of the ravens of Erebor around T.A. 2941, when Thorin and Company reclaimed the mountain from Smaug.[4]

When Peregrin Took became one of the Guards of the Citadel, his new garments included a "high-crowned helm with small raven-wings on either side".[5]

It has been suggested that J.R.R. Tolkien's use of ravens is reminiscent of Odin's two messenger-ravens Huginn and Muminn of the Norse mythology, appearing in the Edda.[6] See also: Roäc: Inspiration

In The Legend of Sigurd and Gudrún, the lord of the ravens is Rerir, grandson of Ódin.[7] Ravens are further associated with the coming of death.[8]

Ravens, level 4 birds, are enchanted and intelligent, friends of the Free Peoples. They are reputedly the messengers of the Vala Mandos, and are able to speak many Mannish and Elvish tongues.[9]

"Ravens of the North" are "creatures of especially powerful magic", being able to understand Westron and having extraordinarily long lives.[10]

Many ravens are seen returning to the Lonely Mountain after Smaug is slain. One is later seen setting out for the Iron Hills, and then returning just as Dáin Ironfoot's army arrives. It is possible this raven could be serving the role of Roäc, but it is never confirmed. As with all other birds in Peter Jackson's Middle-earth films, the ravens do not speak.