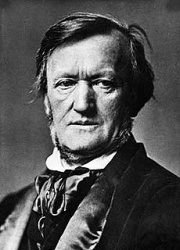 Wilhelm Richard Wagner (22 May 1813 – 13 February 1883) was a German composer, conductor, theatre director and essayist, primarily known for his operas.

Tolkien seems to have been well acquainted with the works of Wagner. Together with his friends in the Kolbítar Club, Tolkien studied the works of Wagner during the late 1920s.[1] Another member of the club, C.S. Lewis, was an avid fan of Wagner, and collected recordings of Wagner, owned illustrations by Arthur Rackham (a British illustrator, often depicting scenes from the works of Wagner), dreamt about turning the Ring into prose, and took Tolkien to London to see a staging of the Ring.[2][3][4] During the 1930s, Lewis and Tolkien apparently began working on a translation of Die Walküre.[5][6]

In the scholarly study of J.R.R. Tolkien, Wagner is mostly mentioned in the context of the apparent similarities between Der Ring des Nibelungen, Wagner's tetralogy of epic operas based on the Norse sagas and the Nibelungenlied, and The Lord of the Rings.