"Therefore Ilúvatar gave to their vision Being, and set it amid the Void, and the Secret Fire was sent to burn at the heart of the World; and it was called Eä."
― Valaquenta 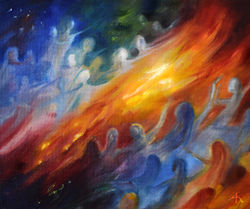 The Secret Fire, also known as the Flame Imperishable, was Ilúvatar's mysterious power of creation in Eä.

The Secret Fire refers to that aspect of Eru Ilúvatar which is his Power of Creation. It is the power to give life and substance, through it he granted free will and true life, imbuing a fëa within the beings he created. The Ainur and Eä were made through it.

Without it the appearance of life would merely be a mockery animated with a Vala's will, such as Morgoth's corruptions, which lived but did not have free will or true life.[note 1] Melkor was envious of it and sought it in the Void, but the Flame was only with Eru.[1] It was with Ilúvatar at the beginning, and later Ilúvatar set it (or an aspect of it) at the centre of Arda.

The Secret Fire is also described as being part of all fëa: it is that Gift which makes sentient beings capable of independent thought. Aulë's Dwarves were not made in mockery of Eru's or any other Vala's creation, but they did not have independent thought or life until Eru granted them fëa.[2]

Gandalf the Grey referred to both the Secret Fire and the Flame of Anor at the Bridge of Khazad-dûm:

You cannot pass, I am a servant of the Secret Fire, wielder of the flame of Anor. You cannot pass.
—The Fellowship of the Ring, "The Bridge of Khazad-dûm"

This is an alternate name of the Holy Spirit in Tolkien's mythos, like Eru is the name of God. In Tolkien and The Silmarillion, Clyde S. Kilby refers to a discussion he had with Tolkien: "Professor Tolkien talked to me at some length about the use of the word 'holy' in The Silmarillion. Very specifically he told me that the 'Secret Fire sent to burn at the heart of the World' in the beginning was the Holy Spirit." (p. 59)