The Silmarils (Quenya Silmarilli)[1][2] were three gems of immense might and beauty. Their theft by Morgoth is the triggering fact of the events of the First Age, narrated in the Quenta Silmarillion ("The History of the Silmarils"). 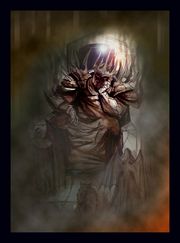 Fëanor was furious at Morgoth and at the Valar's perceived desire to take the gems for their own purposes. Then he and his Sons sweared a terrible Oath: that they would not rest until the Silmarils were recovered, slaying anyone who stand in their way. Fëanor led the Noldor back to Middle-earth and a centenary war began against Morgoth in Beleriand, called the War of the Jewels. But their battles led to no end of grief for the Elves and eventually for the Men of Middle-earth. 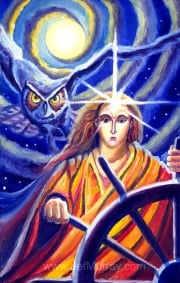 Years passed and the Silmaril passed to the hands of Elwing's husband, Eärendil, the lord of the Havens of Sirion. His people considered the Silmaril to be a blessing for their houses and ships. But the sons of Fëanor still pursued the Silmaril and when they learned that Elwing escaped there, they made their demand in friendly terms, while Eärendil was absent in one of his voyages. But the people of Sirion refused to surrender it, considering it a rightful prize of Beren and Lúthien. Therefore the Fëanorians resolved to make another assault, but again, Elwing and the Silmaril escaped. With the help of Ulmo, Elwing and the Silmaril ended up in the hands of Eärendil; it was its light that guided him through the Shadowy Seas and he found his way to Valinor. The Valar then set this Silmaril as a Star and worn on his brow.[7]

It is said that Fëanor will return only for Dagor Dagorath. Following Melkor's final return and ultimate defeat, the World will be changed and the Silmarils recovered. Fëanor will break his jewels and with their fire Yavanna will revive the Two Trees. The Pelóri Mountains will be flattened and the light of the Two Trees will fill Arda again in a new age of Eternal Bliss.[8]