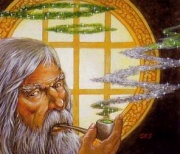 Smoking was an activity or custom begun by the Hobbits (who referred to it as an 'art'). It consisted of inhaling the smoke of the burning leaves of a herb called Pipe-weed.

The Hobbits of Bree claimed to be the first to have smoked the Pipe-weed, but the first who cultivated it was Tobold Hornblower of Longbottom of the Shire, around the year S.R. 1070. Smoking had spread from the Hobbits to Dwarves, Rangers, and Wizards.[2]

J.R.R. Tolkien was an avid pipe smoker. He attributed his addiction to his childhood, when he watched Father Francis Xavier Morgan smoking his pipe in a specific location each time.[3]

People who had met Tolkien noticed that a pipe was almost always in his hand or mouth, often making difficult to understand his speech.[4] In a 1966 interview, Tolkien said: "Every morning I wake up thinking, 'Good, another 24 hours of smoking'".[5]

The card "Smoke Rings" enables the player to re-use one of his discarded characters.[6]