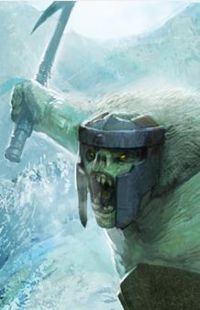 A Snow-troll in The Battle for Middle-earth 2: The Rise of the Witch-king

Snow-trolls were probably a kind of troll, living in an environment of snow and ice. No tale is told of Snow-trolls, so whether they existed (in the Northern Waste) remains open to debate.

During the Long Winter of T.A. 2758 and 2759 that lay upon the fields of Rohan, Helm Hammerhand clad himself in white and stalked the camps of the Dunlendings "like a snow-troll", and killed many with (seemingly) his bare hands. It remained a legend in Dunland, striking fear and hatred into any who heard it.[1]

Snow Trolls are large (10-12 ft tall), grey-white and rare creatures, who prey the northern regions of Middle-earth, They turn into pillars of icy slag, if exposed to the Sun.[2][3]

Snow Trolls are a playable unit in the Angmar faction, being one of the strongest units not only in the faction but also in the game. They are equipped with pickaxes, helmets and small shields. Snow trolls can be used also in the Create-a-hero section.

2007: The Lord of the Rings Online: Shadows of Angmar:

A Snow-troll fought in the army of Skorgrím Dourhand during the Battle of Edhelion. He destroyed the city's gate and tried to kill Dorongúr Whitethorn and the player, but was slain himself by Elrond before he could complete his attempt.[4] Other Snow-trolls are found in the Ered Luin region.

Snow-trolls are encountered on the slopes of Mount Gundabad. They are implied to be hostile, even to the various Orcs and Trolls gathering at the mountain.