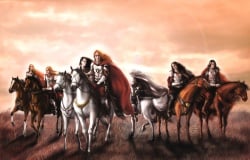 The Sons of Fëanor were the seven Noldorin Elves Maedhros, Maglor, Celegorm, Caranthir, Curufin, Amrod and Amras. They took the Oath of Fëanor with their father, and pursued it after his death in the Dagor-nuin-Giliath. They held lands in East Beleriand, with Maedhros and Maglor holding the immediate passes south of Lothlann, and the other brothers ruling lands behind their guard to the south. Their Sindarin names are the ones usually given.

Fëanor's sons were in general allied with the other Elves of Beleriand against the power of Morgoth. After the recovery of one of the Great Jewels by Beren and Lúthien, however, the Oath of their father came into action, and they fell upon the other Elves in hope of retrieving the Silmaril. They attacked Dior in Doriath, and the Exiles of Gondolin at the Mouths of Sirion, but neither of these forays gained them the Jewel; it was borne into the West by Eärendil.

At the time of the War of Wrath, only two of the seven sons remained, Maedhros and Maglor. They stole the last two Silmarils from the camp of Eönwë, but their evil deeds in recovering them meant that the hallowed Jewels rejected their claimants. Maedhros in anguish threw himself into a fiery fissure, and Maglor in despair cast his Jewel into the Great Sea. 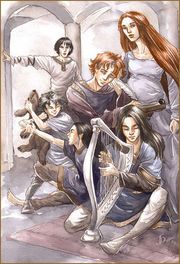