Southern Star was a variety of pipe-weed grown in the Southfarthing of the Shire, and apparently originating in the district around Longbottom. The 'star' of its name presumably refers to the star-shaped flowers of the pipe-weed plant.[1]

In the second (out of seven) drafts of The Lord of the Rings Prologue, "Southern Star" was originally named "Hornpipe Twist".[2] 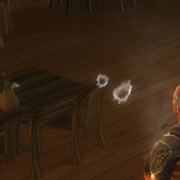 The smoke from Southern Star Pipe-weed takes the form of two smoke rings that pass through each other as they float out from the pipe.