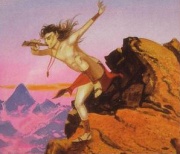 Sprites, or fays, were creatures only mentioned fleetingly in the earliest versions of the tales of Arda and linguistic writings of the Eldar.[1][2]

"About them fared a great host who are the sprites of trees and woods, of dale and forest and mountain-side, or those that sing amid the grass at morning and chant among the standing corn at eve."[1]

"...their number is very great: yet must they not be confused with the Eldar, for they were born before the world and are older than its oldest, and are not of it, but laugh at it much, for had they not somewhat to do with its making, so that it is for the most part a play for them"[1]

The poem An Evening in Tavrobel mentions tiny, gleaming spirits that appear dancing[3] alluding to sprites or fays.

While "sprites" and "fays" seem to have been the most common names for these creatures, other names were also used: brownies, pixies, and leprawns.[1]

A basic division of four groups of sprites and fays, with their Elvish names, are given as follow:

Some other mentions of fays seem rather to be referring to individuals:

Based on etymological information, linguists have suggested that Tolkien intended "the wood-fays to 'use' the forest as their home", and that such forests were watched or guarded by the fays.[7]

Sprites and fays are not mentioned in the later versions of the legendarium. Many of the classes of beings references in The Book of Lost Tales were superseded by the concept of the Maiar, which were not introduced until the reworking of the Annals of Valinor into the Annals of Aman.[10]

The Warrior Ally card "Lindion the Oronín", portraying a unique character, is given the following description: "The fays of the mountains pipe melodies that harmonize with wind and weather, pleasing to the ears of all creatures aloft on wings", apparently inspired by the Orossi (see above). Lindion is playable at the site Stone-circle in the region Old Pûkel Gap.