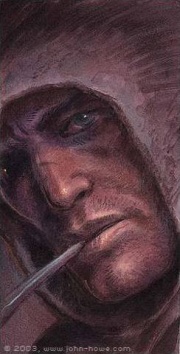 Strider or Stick-at-naught Strider (as told by Bill Ferny), was a nickname given to Aragorn by the people of Eriador (as for example at Bree) during his time as a Ranger.

The name seems to refer to the long legs of the Rangers, who were of Númenórean blood, compared to the shorter-legged Bree-men.

Though Aragorn considered the name scornful, he took it as the name of his royal house: translated into Quenya as Telcontar.