Túrin in Nargothrond is the tenth chapter of The Children of Húrin.

Túrin was admitted to the halls of Nargothrond for he came with Gwindor, who was once betrothed to Finduilas, daughter of Orodreth, King of Nargothrond. But none greatly recognised Gwindor, so much had his torment changed him, for he was bent with age and maimed. When Túrin was asked his name, Agarwaen, son of Úmarth (that is "Blood-stained", son of "Ill-fate") he called himself, for he wished to leave his darkness behind. 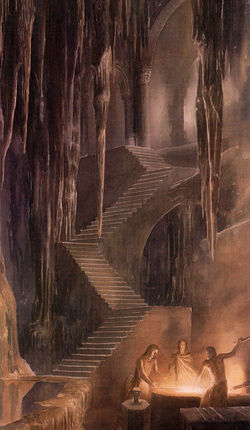 The reforging of Anglachel by Alan Lee

The sword Anglachel was forged anew so that its black edges burned with pale fire; and Túrin's prowess with the blade gained him the respect of the Elves, and after a time he became a counsel of Orodreth; and his advice was to fight Morgoth openly. This Gwindor ever gainsaid, marking that he knew the array of Morgoth - for he had seen that the power of Angband was greater than all the gatherings of Elves and Men. Secrecy and stealth should be their manner.

But Túrin advanced in influence and was soon chief counsellor to the King; and Orodreth then took Túrin's guidance and the Elves no longer took secret ways in their skirmishes, but marched openly from Nargothrond; and a bridge was built at the Doors of Felagund so that they might make swift passage over Narog and hasten to war. For his valour, the elves girt Túrin in dwarf-mail and dwarf-mask so that his enemies flew from him – and they called him Mormegil, the "Black Sword".

All the while, Gwindor's honour fell, for he was weakened from Angband; and Finduilas looked now upon Túrin with admiration, and she found her heart moved when he was near. Seeing this, Gwindor's friendship with Túrin was cooled and the elf cursed Morgoth, for the Great Enemy it seemed would follow his foes until the very bitter end; and he saw the ruin that came in Túrin's train. And Gwindor went to Finduilas and said she must beware, for Agarwaen was in truth Túrin; truly was he the son of Húrin, whose kin Morgoth cursed even now.

Finduilas came straight away to Túrin and asked him why he would hide his real name. In this, Túrin was angered, for he felt his fate was now betrayed; but Gwindor said, "The doom lies in yourself, not your name."

Yet in this time when the Black Sword held peace west of Sirion, Morwen and Niënor fled the tyranny of Dor-Lómin to come to Doriath in Melian’s ward. But there they found Túrin long gone.

Retrieved from "http://tolkiengateway.net/wiki/T%C3%BArin_in_Nargothrond"
Category: The Children of Húrin chapters