The Adventures of Tom Bombadil (poem)

The Adventures of Tom Bombadil (poem)

In the preface to the collection it is stated that these two poems must originate in Buckland since they show more knowledge of that country than any Hobbits west of the Marish were likely to possess. This first poem is the earliest work in the collection and combined various hobbit-versions of legends about Bombadil.

The poem itself has twenty-six stanzas of varying sizes composed of rhymed couplets. 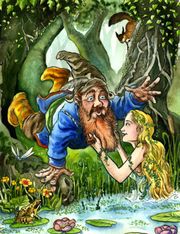 The Adventures of Tom Bombadil part 1 by Richard Svensson

The poem describes a walk of Tom Bombadil and various misfortunes. First he is drawn into the Withywindle by Goldberry, then he is captured or annoyed by various creatures, such as the Old Man Willow, the badger-folk, birds, fish and a Barrow-wight who was waiting for him at night in Tom's home. Tom orders them with a rhyme to let him free or leave, and each time the creatures comply unquestionably.

The next morning he decides to return to Goldberry and he asks her for marriage. The creatures of the Old Forest attend the wedding.

"The Adventures of Tom Bombadil" was first published in the Oxford Magazine on 13 February 1934.[1] J.R.R. Tolkien told Peter Hastings that Tom Bombadil had been put into The Lord of the Rings because he had already "invented" him in this poem and wanted an "adventure" along the way. [2] Later, when the collection of poems were being readied for publication, Tolkien revised his poems to better assimilate them to The Lord of the Rings since they were supposedly written by the hobbits. In this particular poem there was a peacock's feather in Tom's hat (in line four); Tolkien changed it to a swan-wing feather (this alteration was noticed by Pauline Baynes as she was working on illustrations for the book and Tolkien apologized for her being bothered by this detail). [3]

Retrieved from "http://tolkiengateway.net/wiki/The_Adventures_of_Tom_Bombadil_(poem)"
Categories: Stubs | Poems in The Adventures of Tom Bombadil