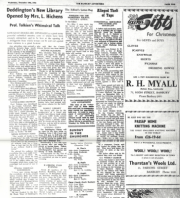 [edit] Excerpts from the speech

"Nowadays books are besieged by a great many powerful embattled enemies, some of whom have been strongly entrenched, and to be here at the opening of a strong point from which troops can be sent out against those enemies is a great honour."