The Battle of the Eastern Field

The Battle of the Eastern Field 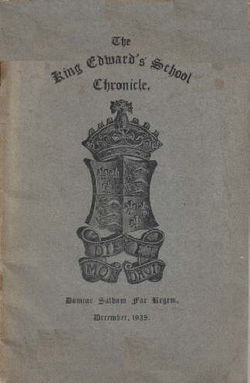 The Battle of the Eastern Field is the first known published poem by J.R.R. Tolkien. It was published in 1911 in The King Edward's School Chronicle on pages 22-26. The poem is a parody of Thomas Babbington Macaulay's The Lays of Ancient Rome.

Ho, rattles sound your warnote!
Ho, trumpets loudly bray!
The clans will strive and gory writhe
Upon the field to-day.
To-day the walls and blackboards
Are hung with flaunting script,
From Atlas on the staircase
To Bogey’s darkling crypt.
Each knight is robed in scarlet,
Or clad in olive green;
A gallant crest upon each breast
Is proudly heaving seen.
While flows our Yellow River,
While stands the great Pavil,
That Thursday in the Lenten Term
Shall be a beanfest still.