The Coming of Glaurung

The Coming of Glaurung

The Coming of Glaurung is the sixteenth chapter of The Children of Húrin.

Since coming to Nargothrond, Glaurung grew both in size and power, with many Orcs under his command. Hearing about the free Woodmen of Brethil, in the third year of Túrin's arrival in Brethil, the dragon started unleasing Orc attacks on that land. However, Túrin kept his word to Níniel and didn't go to war, but these Orcs were stronger and fiercer than previous groups, and Dorlas and his men suffered great damage. 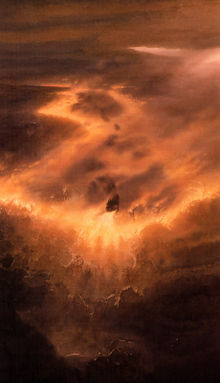 The Coming of Glaurung by Alan Lee

Seeing that the enemy had entered the woods, Turambar took his sword Gurthang, and with his help the men completed defeated the Orcs. When Glaurung heard the news, he was furious but remained quiet and thoughtful, and so the winter passed in peace. Thus the Men of Brethil became confident and happy, but Turambar knew that the day he would face his fate was near, so he sent out many scouts, being more listened-to than Brandir.

In the spring, Níniel fell pregnant and became pale and sad. Bad news came to Brethil at that time: there was a great fire in the Guarded Plain, and they knew it was Glaurung heading northwards, burning everything in his path. Turambar was doubtful about what to do, and only decided a plan at summer, when it was known that Glaurung was heading straight for the Teiglin.

Turambar explained his plain to the Men of Brethil: they wouldn't attack the dragon as an army, and most of the men should stay in Ephel Brandir and be prepared to run should the dragon reach them. These words left the men concerned, but Turambar comforted them reminding them how Azaghâl hurt the dragon during the Nirnaeth. He would do the same: pierce the dragon's belly till death, and for this he only needed a few brave men. Only two answered Turambar's call: Dorlas and Hunthor.

Therefore the three men went to Nen Girith, where Turambar's scouts informed them how the dragon is heading in a straight line, and didn't turn to the Crossings of the Taeglin, so would have to cross the river at Cabed-en-Aras. This was a steep and dangerous ravine, but Turambar decided to go down into it before the dragon crosses it from above.

Meanwhile, Níniel, full of fear, talked with Brandir, but he couldn't comfort her so she decided to follow Turambar instead of waiting for news. Many followed her, wishing to know the result of the confrontation, as many people had great faith in the Black Sword. This group arrived to Nen Girith at dusk, although many then repented approaching the danger with such haste. With so many people having left, Brandir felt insulted and renounced his lordship. He left the settlement to follow his beloved Níniel, limping towards the western border of Brethil.

Retrieved from "http://tolkiengateway.net/wiki/The_Coming_of_Glaurung"
Category: The Children of Húrin chapters