The Fall of Nargothrond is the eleventh chapter of The Children of Húrin.

For five years a peace was realised about Nargothrond. It was then that two Elves came to King Orodreth: Gelmir and Arminas they were who had journeyed long from Círdan at the Mouths of Sirion who sent message from Ulmo; for the Lord of Waters had said peril draws near to Nargothrond. Shut your doors he had bidden and cast down Narog's bridge.

But Ordoreth turned to Túrin Mormegil for counsel, who in his pride would not heed the words sent from Círdan, who, Túrin said, hid from wars in the furthest place of Beleriand, far from the shadow of Morgoth. 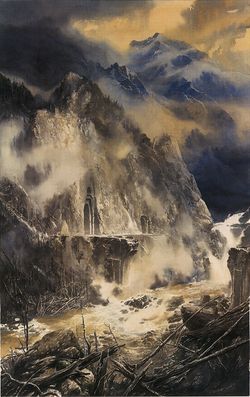 The Fall of Nargothrond by Alan Lee

Now autumn came, and indeed Morgoth unleashed a great horde long prepared and at its head was Glaurung, Father of Dragons. In the northern vale of Sirion was Eithel Ivrin defiled and the Guarded Plain, Talath Dirnen was burned. There came Túrin and Ordoreth, ahead a host of Nargothrond, but the multitude from Angband was greater and none but Túrin guarded by his dwarf-mask could withstand the dragon.

The soldiers of Nargothrond were withered and beaten; and Gwindor in death said, "Haste to Nargothrond and save Finduilas". But Túrin came too late, for Glaurung and a host of Orcs were before him, and the bridge over the Narog proved a ruin for they came upon the Doors in force and all the halls were taken and ruined.

In that sack, Túrin came to the wrecked Doors of Felagund and Glaurung awaited him, so that Túrin was bewitched by the dragon's eye. There Túrin stood as stone as Finduilas amongst the thralls were led away to torment in Angband by a horde of Orcs. And Glaurung held Húrin's son to wound him with the cries of those innocents so they would trouble him thereafter.

With the passing of that dreadful company, Túrin was loosened; but once more Glaurung taunted him, and seemingly released him in pity. As he gave Túrin his freedom, he said to hasten to Dor-lómin to his mother and sister, and not tarry with the fate of Finduilas.

Retrieved from "http://tolkiengateway.net/wiki/The_Fall_of_Nargothrond"
Category: The Children of Húrin chapters