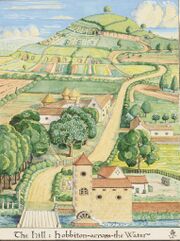 The Hill: Hobbiton-across-the Water is the title of an illustration by J.R.R. Tolkien.[1]

The illustration shows the road leading through Hobbiton to Bagshot Row and the Hobbiton Hill. Just below the Hill is seen the Party Tree. In the foreground is depicted the Water and the Old Mill. In the centre stands the Old Grange. In the distant, to the left of the Hill, one can glimpse what likely is the Bindbale Wood of the North Farthing.[2][1] 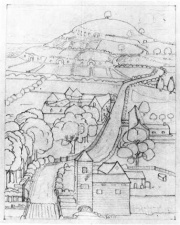 The tracing of the first, black-and-white version.

Tolkien made several sketches — at least five — before creating the final composition, first rendered as a drawing in black and white. This drawing was used as a frontispiece to the first British printing of The Hobbit in 1937. The second version (with some minor changes[note 1]), rendered in water colour by Tolkien, appeared as frontispiece to the second British impression of The Hobbit (also in 1937), and in the first American edition (1938).[1] 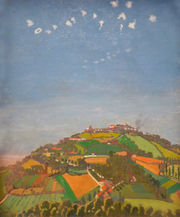 Fans have speculated that Tolkien might have been inspired by the picture "German Planes visiting Cassel" (see Gallery below), painted by Sir William Orpen in 1917.[4]