The Lay of Aotrou and Itroun is a long poem written by J.R.R. Tolkien in 1930, first published in The Welsh Review in December 1945. It was published in its own volume in 2016, edited by Verlyn Flieger.[1]

Aotrou and Itroun are Breton words for "lord" and "lady". The poem is modelled on the genre of the "Breton lay" popular in Middle English literature of the 12th century, and it explores the conflict of heroic or chivalric values and Christianity, and their relation to the institution of marriage.

A major source for the poem has been identified as the Breton song An Aotrou Nann hag ar Gorigann (Lord Nann and the Fairy), which Tolkien probably knew through Wimberly's Folklore in the English and Scottish Ballads (1928).[2] Tolkien adds to his source a stern moral – repudiation of all traffic with the supernatural.[3] 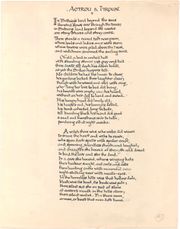 First folio of the manuscript

In the poem, Aotrou and Itroun are a couple of Breton nobility. They are childless, and Aotrou seeks the help of a witch. When Itroun is with child, the witch reappears, revealing herself as the Corrigan, and asks for Aotrou's love as payment. Aotrou sacrifices his knightly honour to Christian values, and breaks his word.

"I gave no love. My love is wed;
my wife now lieth in child-bed,
and I curse the beast that cheated me
and drew me to this dell to thee."

Cursed by the Corrigan to die in three days, Aotrou takes the consequences and places his trust in Providence:

In three days I shall live at ease
and die but when it God doth please
in eld, or in some time to come
in the brave wars of Christendom.

Aotrou died after three days, followed by his wife with a broken heart. They are buried together, and they do not live to see their offspring grow up.

[edit] Relation to the legendarium

While not being among Tolkien's works on the legendarium, The Lay of Aotrou and Itroun includes aspects which appear to have inspired his tales of Arda:

Initially The Lay of Aotrou and Itroun was published in The Welsh Review vol.IV, no.4 in 1945.[6]

More than 50 years later, the poem was first reprinted as a bilingual (Serbian/English) standalone book Pesma o Otruu i Itrun in 2002, in a limited edition of 500 copies.[7] An expanded edition of it was published in June 2015.[8]

The poem was published in English and fully edited by Verlyn Flieger on 3 November 2016.[1]