The Marvellous Land of Snergs is a children's fantasy novel by E. A. Wyke-Smith, first published in 1927 with illustrations by George Morrow. The work was an inspiration source for J.R.R. Tolkien's The Hobbit.[1][2]

In 1996, Douglas A. Anderson brought back the novel in print (Old Earth Books; ISBN 1882968-04-2; paperback), and contributed to the republication with a critical introduction and annotated bibliographical list.[3][4]

The book opens with a description of a Settlement for Superfluous Children. A little to the north of the Settlement Vanderdecken and his crew are in shore quarters; the Flying Dutchman anchored close by. To the south are the amicable if unintelligent Snergs, some off-shoot of the pixies. Rather naughtily Joe and Sylvia run away, and in the company of Gorbo - of all Snergs least intelligent - get mixed up with magic and find themselves the wrong side of the river. Escapes from Golithos, an ogre imperfectly reformed; from Mother Meldrum, that sinister witch; from the wicked King Kul; and the rescue by Vanderdecken and the Snergs, fill a joyous volume.[2] 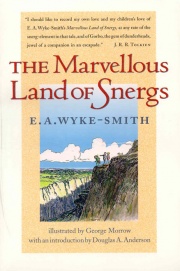 It was a book beloved by Tolkien and his children. Now, for the first time in nearly 70 years, this magical book is back in print with the original text, the classic illustrations by noted Punch artist George Morrow, and an introduction by Tolkien scholar Douglas A. Anderson. This book has garnered praise from: Charles de Lint, Humphrey Carpenter, Alison Lurie, and Jack Zipes.[4]