The Tale of Gondolin

The Tale of Gondolin

The Tale of Gondolin is an attempt by Alex Lewis to compile the unfinished tales of Turgon and Gondolin by J.R.R. Tolkien into a single publication (in a manner similar to The Children of Húrin). The story draws upon texts from The Silmarillion, Unfinished Tales: "Of Tuor and his Coming to Gondolin", and The Book of Lost Tales Part Two.

The Tale of Gondolin was not backed by the Tolkien Estate, although it is claimed that Priscilla Tolkien gave a verbal permission to Lewis to work with the project.[1]

The publication was limited to 50 copies worldwide and the suggested value for a single copy is well over $1,000.

In 1987 two proof copies of the book were produced. One was red leather bound and given to Priscilla Tolkien and the other was clothbound for Lewis. Neither copies were signed or illustrated. 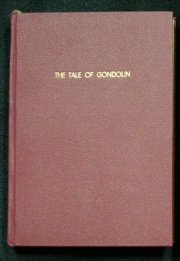 The cover of the first state

In 1992, artist Ruth Lacon was commissioned to make illustrations for the book. She strived to create "a modern analogue to an illustrated and illuminated medieval manuscript."[2]

By the end of 1995, 28 out of the 50 copies had been sold though they were not sold in sequential order. The "Number One" was donated to Priscilla Tolkien. These 28 are known as the First State. 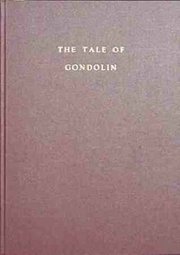 The cover of the second state

In late 2003 or early 2004 a US book collector found out from Alex Lewis that the remaining 22 copies had not been sold and were still unbound. He chose to buy the 22 copies and had them bound by another binder in Manchester as the original binder had unfortunately passed away. These 22 newly bound copies were finished in 2004 and are known as the Second State.