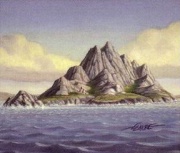 Tolfalas also Tol Falas was a large island, that stood beyond the Ethir Anduin in the Bay of Belfalas.

During the Drowning of Númenor Tolfalas was almost destroyed, and was left like a barren and lonely mountain in the water not far from the Ethir.[1]

In early Third Age, Tolfalas was settled by fisher-folk from the Ethir. After the Kin-strife, the island was raided by the Corsairs, and became almost deserted until the Fourth Age.[3]

Players face an attack by Undead at the site of Tolfalas.