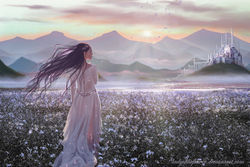 Tumladen was the hidden valley within the Encircling Mountains where the Elven city of Gondolin was built during the First Age.

The valley was hidden between the mountain range of the Echoriad, with the Crissaegrim in the south. The only entry to the valley was Orfalch Echor, the pass formed by the Dry River.[1] In the middle of the green plain there was the rocky height of Amon Gwareth, and upon it the city of Gondolin.[2]

In ancient days, the valley was a great lake between the mountains, but was emptied through the Dry River.[1] In F.A. 53, Turgon, a lord of the exiled Noldor, discovered Tumladen under the divine guidance of the Vala Ulmo, Lord of Waters.[3] There he began to build the city of Gondolin in the top of Amon Gwareth, and after fifty years of work he moved there from Nevrast with all his people.[1]

During the Quest of the Silmaril, Beren and Lúthien could see the valley while being carried by Eagles. Tears fell from Lúthien's eyes into the plain, and from them a fountain sprang to life: the Fountain of Tinúviel, or Eithel Nínui.[4]

During the Fall of Gondolin, the valley was covered with mists due the fume of the burning and the steam of the fountains in the flame of the dragons. This allowed the survivors to escape from the slaughter through the plain without being noticed and reach the mountains.[2]

In the early Etymologies, Tumladen was given as Noldorin for "Level Vale".[9]

The Quenya name for the vale was i Tumbo, short form of i Tumbo Tarmacorto ("the Vale of the High Mountain Circle"). Its Sindarin cognate was Tum Orchorod.[8]

In the earliest version of the legendarium in The Book of Lost Tales, the vale was called Tumladin ("Valley of Smoothness") in Gnomish. The vale had been leveled by the Gnomes with great toil, so everything there could be watched from Amon Gwareth.[10]:163 Tuor and Voronwë had to walk a day's light march to reach Amon Gwareth from the entrance of the Way of Escape. The plain "was of a marvellous level, broken but here and there by boulders round and smooth which lay amid a sward, or by pools in rocky beds. Many fair pathways lay across that plain."[10]:158