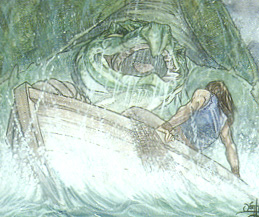 J.R.R. Tolkien was inspired by an Old English bestiary, appearing in the Exeter Book. The idea of giant marine turtles ultimately derives from Eastern myths, and in the European versions the monster is often confused with whales.[2]

[edit] Other version of the legendarium

It is never explained whether the turtle-fish was an actual race or just a fictional character for the poem "Fastitocalon". In an earlier version of the legendarium, Ulmo, Lord of the Waters, uses his giant whale, Uin, to drag Tol Eressëa towards Aman.[3] This whale reappears in J.R.R. Tolkien's story Roverandom. It is thinkable that Tolkien, in an early phase of the mythology, imagined the fastitocalon to be another one of Ulmo's creatures.

Turtle-fish, also called Fell Turtles and Festitycelyn, are described as monsters that can grow as large as fifty feet in length, and that live both in the seas and in the large rivers and lakes.[4][5][6]

The card "Fell Turtle", released in the set METW, is a Hazard Creature.

Dread-turtles, huge reptiles with spiky shells, are possibly inspired by the Turtle-fish. The largest dread-turtle, found in Rohan, is referred to as the Fastitocalon.

Retrieved from "http://tolkiengateway.net/wiki/Turtle-fish"
Category: Other races