Orcs were the footsoldiers of evil overlords - Sauron, Morgoth and the Witch-king of Angmar - but also operated as a seperate faction throughout the Ages of Arda.

In Tolkien's writing, Orcs are described as humanoid, roughly human-sized, ugly and filthy. Although not dim-witted, they are portrayed as dull and miserable beings, who corrupt words (an insult to a philologist like Tolkien) and are only able to destroy, not to create. They have sour black blood. Orcs are used as soldiers by both the greater and lesser villains of The Lord of the Rings — Sauron and Saruman. In Tolkien's Sindarin language, "Orc" is orch, plural yrch. In his late, post-Lord of the Rings writings (published in The Peoples of Middle-earth), he preferred the spelling "Ork", evidently mainly to avoid the form Orcish, which would be naturally pronounced with the c as /s/ instead of /k/. (In Tolkien's languages the letter c was always pronounced /k/.) It is also possible that the word is a Common Tongue Version of 'orch', the Sindarin word for Orc. The original sense of the word seems to be "bogey", "bogeyman", that is, something that provokes fear, as seen in the Quenya cognate urko, pl. urqui.

The origin of Orcs is an open question. In Tolkien's writings, evil is not capable of independent creation, making it unlikely that the Vala Melkor, who was obviously the first to produce them, could do that ex nihilo. In the The Silmarillion is mentioned that the Orcs were transformed from Elves — the purest form of life on Arda (the Earth) — by means of torture and mutilation; and this "theory" would then become the most popular. There are hints in the History of Middle-earth series of books, (especially in Morgoth's Ring in the section "Myths Transformed"), that some Orc leaders, such as the First Age's Boldog, or the Great Goblin encountered by Bilbo and the Dwarves, may in fact have been fallen Maiar which had taken Orc form

Later under Morgoth's lieutenant, Sauron, it has been suggested that Men were cross-bred with the Orcs. This process was later repeated during the War of the Ring, creating the fierce Orcs known as Uruk-hai.

Yet other Orcs may have begun as animals of vaguely humanoid shapes, empowered by the will of the Dark Lord (first Morgoth, later Sauron): this may explain the references to their "beaks and feathers" in Tolkien's writings.

It is certain all Orcs were dependent on the Dark Lord in various ways: after their leader was defeated, the Orcs were confused and dismayed, and easily scattered by their enemies. In the millennia after Morgoth's defeat and banishment from Arda, they were without a leader they degenerated to small, quarrelsome tribes hiding in the Misty Mountains. Only when Sauron returned to power did they begin to reclaim some of their old power. The same happened after Sauron's defeat by the Last Alliance of Elves and Men: only when Sauron returned as the Necromancer of Mirkwood did the Orcs become a real danger for Middle-earth again.

It is interesting to note that to an extent, Tolkien did not regard Orcs as evil in their own right, but only as tools of Melkor and Sauron. He wrote once that "we were all orcs in the Great War", indicating perhaps that an orc for him was not an inherent build-up of personality, but rather a state of mind bound upon destruction.

After their cration during the Battle of the Powers, Orcs were used in every battle fought agains Morgoth. Orcs were the primary force of Morgoth in the Siege of Utumno. Although most of them were killed, some survived and entered the lands of Beleriand during Morgoth's imprisonment in Valinor. When Morgoth returned to Angband he created new hordes of Orcs and invaded Beleriand, where the First Battle of Beleriand took place. Orcs fought also in Dagor-nuin-Giliath.

Orcs appear in the First Age as the core force of Morgoth. Hundreds of thousands of Orcs were bred in Angmar to participate in the Battles of Beleriand, which lasted 587 years.

Orcs first appear in the First Age in the Battle of the Lammoth, where they were defeated by Fingolfin and his Noldor. Orcs participated in battles such as the Dagor Aglareb, Dagor Bragollach, Nirnaeth Arnoediad, Fall of the Falas, and finally in the War of Wrath, were they were almost extinguished.

Orcs do not play a major role in the Second Age, as Sauron dominated over Middle-earth for short periods. Even though, Orcs participated in the War of the Elves and Sauron, in S.A.1700. Moreover, the Orcs of the Misty Mountains started a war agains the Dwarves, resulting in the First Sack of Gundabad ind its occupation by the Orcs. Finally, Orcs were the core force of Sauron during the War of the Last Alliance, and fougth in great battles such as the Battle of Dagorlad and the Siege of Barad-dûr.

During the Third Age, Orcs were the standard troops of the Witch-king of Angmar and Sauron (both in Mordor and in Dol Guldur).

In Angmar, Orcs fought in the Angmar War. Years Later, they invaded Eriador under the leadership of the Necromancer.

The Orcs of the Misty Mountains, one of the few independent Orcish societies, and their leader Azog started out the War of the Dwarves and Orcs, and after their defeat they retreated in their caves. They appeared again in T.A. 2941, when the Battle of Five Armies took place.

The Orcs in Dol Guldur remaind in Mirkwood until the Fall of Dol Guldur, one of the lsat battles of the War of the Ring.

[edit] Fourth Age and beyond

Although the entire force of Sauron was destroyed after the War of the Ring, it is assumed that many Orcs continiued to live beneath the Misty Mountains and cause little trouble.

Tolkien loosely implies that there are actually several different breeds of Orcs, not simply in the wide variety in clans, but strains of Orc that were specifically bred for certain tasks.

The Fellowship usually encounters the large soldier-Orcs bred for war, and sometimes the "snaga" variety which were more geared towards being laborers. However, a strong hint at the variety of Orc breeds is when Frodo and Sam are in Mordor, and realize that they are being followed by two Orcs, then hide to observe them. One of the Orcs is a normal soldier-Orc, but the other is described as a "Snuffler", a breed specifically geared towards being a tracker. This tracker-Orc was, compared to the soldier-Orc, physically unimposing, but had vastly overdeveloped sensory organs, particularly a single giant nostril. While physically weak compared to the soldier-Orc, the "snuffler" was able to skillfully kill the soldier-orc when they got into a disagreement.

Tolkien's Orcs have been a subject of criticism of racism as they are described as less-handsome Mongolians..., black-skinned and monkey-resembling. Another possible offensive theme present in orcs (though not necessarily racist), is the fact that when the orcs talk, they often use the same phrases and accents that the English working-class is known to use.

According to the oldest "theory" proposed by Tolkien, Orcs were made of stone and slime through the sorcery of Morgoth. But, Tolkien later changed the legendarium so that Morgoth could no longer produce life on his own.

While Tolkien originally saw all Orcs as descended from tortured Elves, later comments of his indicate, according to Christopher Tolkien in Morgoth's Ring ("Myths Transformed, text X"), that he began to feel uncomfortable with the theory that orcs were descending from Elves. However, Tolkien died before he could complete his upheaval of the cosmology, and in the published version of The Silmarillion, the Elf origin of Orcs was adopted. 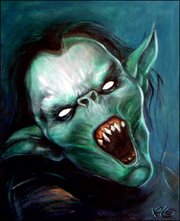 In The Hobbit, Tolkien used the word "goblin" for Orcs, because he had not yet identified the world of The Hobbit with Middle-earth (which predated The Hobbit by several decades, in early writings which would later become The Silmarillion). Fortunately Tolkien did include some references to his mythology in the Hobbit, which later allowed him to identify the lands of the Hobbit with his Middle-earth. In The Lord of the Rings, "Orc" is used predominantly, and "goblin" mostly in the Hobbits' speech. This change can be seen either as a part of the shift towards the use of Elvish words that occurred during the period between the writing of The Hobbit and the writing of The Lord of the Rings, or a translation of the Hobbits' more colloquial manner (if we "accept" the books' authenticity and regard Tolkien merely as a translator). So essentially the race is correctly named "Orc", and "Goblin" is a colloquial "slang term" for Orcs used by Hobbits and sometimes picked up by Men and Elves. It is possible that "goblin" refers to the those of the orcish race who are not under the control of Sauron (or Morgoth), whereas using "orc" directly would refer to servants of (whichever) Dark Lord. Tolkien did mention several times that orcs were not inherently evil, something this theory would partly emphasize.

The original edition of the Hobbit and early drafts of The Lord of the Rings first used 'goblin' everywhere and used 'hobgoblin' for larger, more evil goblins: when goblins were replaced with Orcs Tolkien invented the term Uruk-hai for his more evil Orcs.