User:Pallando
This user is a Member

Hi, I'm a longtime Tolkien fan and student and am glad to be able to contribute to a resource I find very useful!

I happen to have a full, bus sized, double sided preview poster for the first Lord of the Rings movie (the one that says "Power can be held in the smallest of things") framed as well as normal sized poster of the same.

As of May 2012, I have the following Lord of the Rings LEGO sets:

I've also created a Tengwar Transcriber (overview) which transcribes the input so that they're properly encoded via Dan Smith's encodings. In beta right now, drop me a note to get access. Will eventually be on the Android Market.

I'm in process of creating a Chrome extension and an Android app for Helge Fauskanger's Quenya Wordlists (overview). 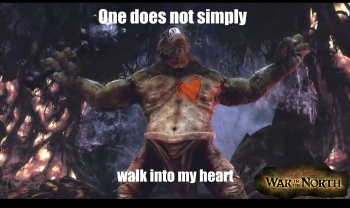 This is the winning image from War in the North's valentine's day meme competition - created via a screenshot of the YouTube promos of WitN and Google+/Picnik's on-line editing tools.