The Variags came from Khand, a little-known land southeast of Mordor.[1] In the Third Age Khand was under the influence of Mordor; in T.A. 1944 the Men of Khand together with the Southrons of Near Harad joined the Wainriders to attack Gondor.[2]

During the War of the Ring the Variags fought at the Battle of the Pelennor Fields. They were held in reserve in Osgiliath along with armies of Easterlings and Southrons. After the death of the Witch-king they were sent onto the battlefield by Gothmog. Their ranks were among troll-men and Orcs when the knights of Dol Amroth ran and drove them back.[3]

The meaning of Variag is unknown; it is, along with mûmak and Khand, one of the few known words from the languages of the Men of the East and allies of Sauron.[4]

It is not clear if the word "Variag" is synonymous with the Men of Khand in general, or is a specific group or tribe of those men. The name appears only in context of the Battle of the Pelennor; the Annals of Kings and Rulers mention the Men of Khand who moved against Gondor in the Third Age, but the name Variags is not used.

It has been suggested that Tolkien adopted the Slavic term to indicate that the Variags were possibly mercenaries serving a possible Lord of Khand.[5] 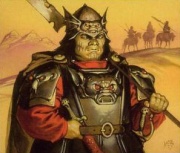 Variags, who speak the tongue Varadja, share ties with both Easterlings and Haradrim.[6][7]

A group of Variags in The Lord of the Rings Online

The Variags are first encountered as enemies in Far Anórien, guarding the road to Minas Tirith against the passage of Rohirrim. Another group of Variags is found in North Ithilien after the Battle of the Pelennor Fields, attempting to retreat home into Khand. Unlike the Easterlings and the Haradrim, the Variags are mercenaries, following Sauron not out of fear or worship but because of the riches promised to them. As such, they hold no real hatred against the Men of the West and at several points players have the option to simply pay them to defuse an armed situation.