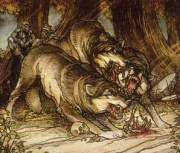 On 13 January of T.A. 3019 the Fellowship of the Ring camped at Hollin and were attacked by wolves.[2] The next morning no remains of Wolves were found around.

In Quenya, one of the words for "wolf" is ñarmo or narmo. Cognates of the same meaning are Doriathrin garm, and Noldorin garaf. (A "wolf-howl" is naule in Quenya, and gaul in Noldorin.)[3]

In Gnomish, one of Tolkien's early conceptions of an Elven language, "wolf" is harog or harw; "a she-wolf" is harach;[5] Qenya has ulku "wolf".[6]