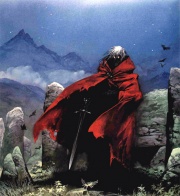 Wraiths was a name for people having been transformed into undead beings.[1] The realm of the wraiths was called the Wraith-world.[2]

In the Elder Days, the wraith of Gorlim appeared in a dream of Beren.[3]

In the Second Age, the Men of the White Mountains broke their oath to Isildur. This crime combined by Isildur's curse turned the Oathbreakers into shades who haunted the mountains[4] until the Third Age. Aragorn II, in the capacity of the Heir of Isildur, released the Oathbreakers from their curse in return for their aid at Pelargir.[5]

In the Third Age, it was rumoured that the wraith of Helm Hammerhand haunted the enemies of Rohan, killing those who felt fear.[6]

The most famous of the wraiths were the Ringwraiths, Men ensnared by Sauron's Nine Rings.[7] Some of the victims of the Ringwraiths, too, could be transformed into wraiths, albeit lesser and under their command (although there are no records of such a being).[2] This nearly happened to Frodo Baggins, after having been stabbed by the Morgul-knife of the Witch-king.[1]

The Black Speech/Sindarin word gûl was translated as "wraith(s)" in the Red Book of Westmarch.[7][8][9]

In a draft for The Lord of the Rings Appendices, the Paths of the Dead were said to have been guarded by the "fell wraiths of the Forgotten Men".[10]

In another draft it is said that the Rings of Power transformed their bearers into wraiths, thus creating elf-, goblin-, men-, or dwarf-wraiths.[11]

The wraith Gaurithoth, an undead Númenórean lieutenant, serves the Witch-king and haunts a burial mound near the Blue Mountains.[14]

Wraiths are the most common of the three type of ghosts (the other being phantoms and wights). The wraith is without a physical, tangible form, and consists only of the soul of a person wishing to fulfil an evil goal after his or her death.[15]

Wraiths refers to the category of Unseen beings that includes the Nazgûl and victims of Morgul blades. The cursed, lingering spirits of Men such as the Dead Men of Dunharrow are called Shades and categorized as The Dead. Wraiths appeared as leaders of the Enemy and elite forces in many areas. The most commonly encountered wraiths were the red-robed Cargûl. One of the game's main antagonists, Mordirith, was a wraith who is the Steward of Angmar.