Anárion's defence of Osgiliath began in S.A. 3429 and continued until the arrival of the host of the Last Alliance in 3434.[1] 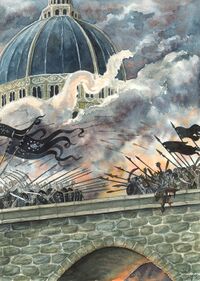 After the Downfall of Númenor, Anárion and his brother Isildur established and shared the realm of Gondor, setting thrones side by side in the Great Hall of Osgiliath. Unbeknownst to them, Sauron also survived the Downfall and had reestablished himself in Mordor. When he deemed the time to be right, Sauron led a great force that took Minas Ithil, destroyed the White Tree of Isildur, and forced Isildur and his family (with a seedling of the tree) to flee down the Anduin. While Isildur journeyed to Elendil, Anárion held Osgiliath and even drove the Enemy back to the mountains. However, Sauron gathered new forces to attack so that Anárion had to maintain a defence of the city until help could arrive. With the coming of Elendil and Gil-galad to the Dagorlad the threat to the city was ended.[2]