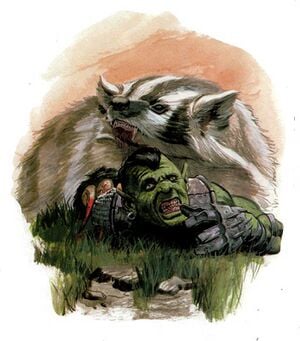 "There must have been a mighty crowd of dwarves here at one time and every one of them busier than badgers for five hundred years to make all this, and most in hard rock too!"
― Samwise Gamgee[1]

Badgers were known in the Westlands for being excellent hole-diggers.[1] Men used traps to catch these animals.[2]

A mysterious kind of apparently sentient badgers, only told of in legends, were called the Badger-folk.[3] Indeed, Tom Bombadil told to Frodo Baggins and his companions some absurd stories about the queer ways of badgers.[4]

Badgers (which are given game statistics) are carnivorous animals of the fauna of Rhovanion. They are timid but can be dangerous if cornered.[5]

Badgers (which are given game statistics) can be find in the Shire and throughout Eriador.[6]