The army of Saruman consisted of his specially bred Uruk-hai orcs supported by Dunlendings. It was mentioned to consist of "about ten thousand Orcs", with an unknown but far smaller number of Dulendings.[1] 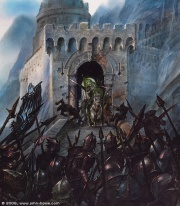