Belegaer, the Great Sea, the Sundering Seas, or the Western Sea,[1] was the sea of Arda that was west of Middle-earth.

The full extent of Belegaer after the Downfall of Númenor is never made clear, but it reached far enough to the north to be ice-covered, and far to the south.

After the War of Wrath, Belegaer was widened by the drowning of a large part of Middle-earth, (and possibly parts of Aman). The bridge of ice in the north was removed, removing land access to the western continent. During the Akallabêth in the Second Age, the seas were bent and the world was made round. Aman was removed from the world, Belegaer washed "new lands", and only the chosen could find the Straight Road to Valinor. The new western end of Belegaer is never described in the narrative, although there are indications that Númenórean refugees reached them in search for Valinor. 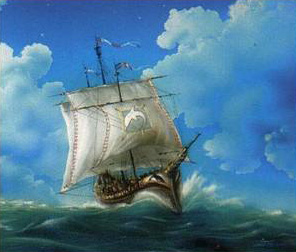 Belegaer is Sindarin for "Great Sea", from beleg ("mighty") + aer ("sea").[2] The Quenya name of Belegaer, never used in primary writing, is Alatairë.[3]

Karen Wynn Fonstad has noted that "Belegaer was comparable to the Atlantic".[4]