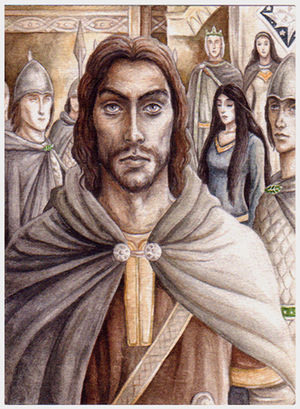 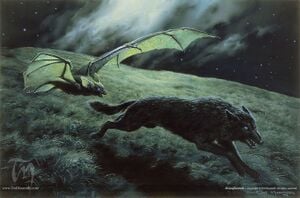 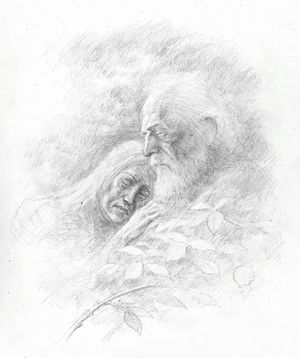 In the first pencilled draft of the story of the Beren and Lúthien, Beren was a mortal Man;[13] but when Tolkien erased it and wrote the "Tale of Tinúviel" of the The Book of Lost Tales, he became an Elf: one of the Gnomes of Dor-lómin, the son of Egnor the Forester.[14]

He arrived in Artanor (an early form of Doriath) and saw Tinúviel (the early name of Lúthien) as in the later work, although the backstory regarding the outlaws of Barahir is absent in the early tale. The displeasure of King Tinwelint against him was because the Dark Elves of Artanor considered those Elves treacherous.[15] After being sent to obtain a Silmaril by Tinwelint, Beren heads directly to Angamandi, and is captured by orcs and brought before Melko[16] rather than going to seek the aid of King Finrod Felagund. Throughout this early tale, the entire "Nargothrond element" is absent.[17] Instead of being imprisoned in Tol-in-Gaurhoth by Sauron, Beren is put to work as a scullion in the kitchens of Tevildo, Prince of Cats, a very early narrative forerunner to Sauron.[18] Upon his rescue from the castle of Tevildo by Tinúviel, he emerged with a kitchen knife[19] which he later used to cut a Silmaril from the Iron Crown of Melko.[20] This weapon is used in place of Angrist, since the encounter with Celegorm Curufin is absent in this early tale.

After obtaining the Silmaril, the jewel and the hand of Beren were bitten off by the wolf Karkaras (an early name for Carcharoth).[21] Beren and Tinúviel then fled and were found by Huan, who brought them to Artanor.[22] This contrasts with the rescue of Beren and Lúthien from the gates of Angband by Thorondor and the Eagles in the published version of The Silmarillion; Christopher Tolkien remarks that "far more is made of the healing of Beren's wound" in the final work.[23]

The story of Beren and Lúthien, though mentioned only briefly in The Lord of the Rings, was a central part of the Legendarium. Tolkien once referred to it as "the kernel of the mythology".[25] He went on to say that it "arose from a small woodland glade filled with 'hemlocks'", which he visited while serving in the Humber Garrison in 1918 (during World War I).