The Blue Wizards (S. Ithryn Luin)[note 1] were the two Wizards who were sent into the far East and South of Middle-earth to contest the will of Sauron, but never returned.

Tolkien's conception of the two Blue Wizards changed dramatically between his earlier and later writings.

Nothing more was said of these two wizards in The Lord of the Rings as it was published. However, whilst preparing (in 1954) an Index for The Return of the King, Tolkien wrote what his son later referred to as the 'essay on the Istari'. There it is said that of the chief wizards who went to the North of Middle-earth there were five, and two of these were clad in sea-blue. Little was known about these two in the West of Middle-earth; even their individual names were unknown, but they were known collectively as Ithryn Luin, the Blue Wizards. It is said they travelled into the East with Curunír but they did not return into the West. Their fate was unknown, but some held that they fell into evil and became servants of Sauron.[1] 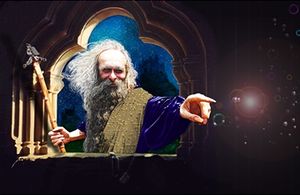 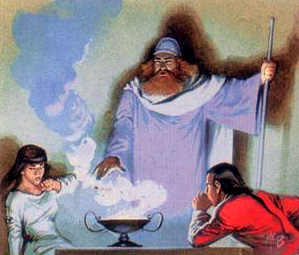 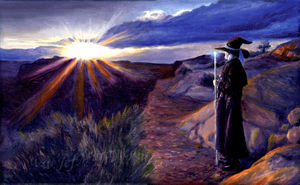 The Blue Wizards have not appeared physically in any adaptation of Middle earth works so far, and they are mentioned and implied only in the following adaptations:

In the game,three artefacts describe the encounter of two wizards whose names couldn't be remembered travelling side by side into Mordor. It is implied to be the Blue Wizards from the description of the artifact. Furthermore, a figurine depicting them has been carved out of azurite, a blue stone. More lore tells the player that the Black Hand could have been a king that brought Sauron the heads of two Istari. Whether or not this is true is unknown.