Breaking of the Fellowship

While the Fellowship camped on the western side of the Anduin near the Falls of Rauros, they realised that the time had come to choose whether to go to Mordor and destroy the Ring or to Minas Tirith in Gondor so that the Fellowship could aid the defence of the city. Frodo began to feel overwhelmed by the decision and asked to leave in order to think more on the choice. While he was thinking, Boromir came to him, unseen by the Fellowship, and talked of great battles and victories, to which Frodo did not listen much. Then, Boromir asked Frodo to lend him the Ring. When Frodo refused, Boromir attacked Frodo. Frodo slipped on the Ring and disappeared, fleeing to the summit of Amon Hen. There he felt the great Eye searching for him, and after a moment of struggle, he took off the Ring, and was not discovered. Deciding that he must go on alone, Frodo once more put on the Ring and began to descend the hill. 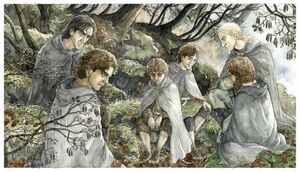 "Waiting for Frodo" by Anke Eißmann

Back in the camp, the other members of the Fellowship had discovered Boromir was no longer among them, and that the time had long passed for Frodo to return. Boromir then returned to them, and would say little, except that he had spoken angrily to Frodo, who had put the Ring on and disappeared. Before Aragorn could devise a plan to search, Merry and Pippin went running off in one direction, Legolas and Gimli in another, and Sam in another. But Sam guessed his master's plan and ran to the shore to follow Frodo, who had gone to take one of the boats and leave with it. Sam reached it just in time, and refusing to allow Frodo to leave by himself, set off with him on the final part of their journey.[1]

Aragorn, still searching for Frodo, heard the sounds of a clash and the horn of Boromir from where he stood upon Amon Hen. He followed the sounds and at last came upon Boromir, pierced by many arrows. Many Orcs and Uruk-hai lay dead nearby. Boromir, in his final moments, confessed to Aragorn that he had tried to take the Ring from Frodo, and that the Orcs had carried off Merry and Pippin. Boromir had fallen defending the Hobbits. Legolas and Gimli found Aragorn, and they pondered what path to take next. Together they placed Boromir in a boat with his cloven horn, and sent it off the Falls of Rauros. They then set off in search of Merry and Pippin.[2]