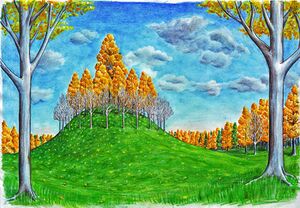 "...He left the hill of Cerin Amroth and came there never again as living man."
― The Fellowship of the Ring, "Lothlórien"

Cerin Amroth was a mound in the heart of the ancient land of Lothlórien on which grew two rings of trees and a great tree with a white flet.[1]

The hill was originally piled after the first millennium of the Third Age to be used as an outlook post for the growing shadow of Dol Guldur. Amroth, the king of Lórien, later built a house on the flet to use as a home and the hill became named after him.[2] However his house was not present centuries later, and the hill was covered with elanor and niphredil.[3]

The Fellowship of the Ring would briefly visit Cerin Amroth during their journey. Frodo would see much of the land surrounding Lothlórien, as well as the fortress of Dol Guldur[4] .

It was here that Aragorn and Arwen betrothed centuries later, and where Arwen surrendered her life[5] in Fo.A. 121.[6]