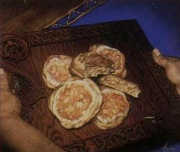 In The Etymologies, cram is said to be a Noldorin word (the precursor of Sindarin), from a root (KRAB-) meaning "press".[3] It was an "added entry"; Tolkien wrote much of The Etymologies before The Hobbit came out. It is unclear whether this was any more than fancy at the time, as several of these "added entries" were later reenvisioned with a non-Eldarin origin.[source?]

cram also has relevant meanings in English, like "To eat greedily, and to satiety; to stuff oneself".