Crickhollow was a location, perhaps a small settlement, in Buckland, located a short way to the north-east of Brandy Hall.[1]

Frodo Baggins was instructed by Gandalf to find a reason why he should leave Hobbiton (and the Shire) and meet him in Bree. In the summer of T.A. 3018, Frodo Baggins bought this house, as an excuse for leaving Hobbiton to the east.[3] 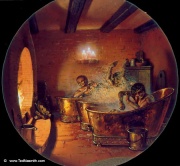 While Frodo, Sam, and Pippin moved out, Merry and Fatty Bolger were already in that house, making preparations for their arrival. They were the only Hobbits who knew that Frodo would begin a journey to the east, so they made preparation for their departure as well.

On 25 September, Frodo and his company arrived at the lodgings, and met Merry and Fatty. The next day Frodo and his party departed for the Old Forest. It was decided that Fatty would stay at Crickhollow to maintain the pretence that Frodo was still in residence to hide his departure.[2] Frodo spent only one night; at dawn they picked up the ponies from a nearby stable and rode to the High Hay.

In the early hours of 30 September three Black Riders came to the house in Crickhollow,[4] but Fatty Bolger had already escaped. He had run to the nearest house and from there he spread news of an invasion, which travelled swiftly to Brandy Hall, and resulted in the rousing of the hobbits of Buckland.[5]

Crickhollow is visited by players during the Volume 1 Epic Book, "Stirrings in the Darkness". Fredegar Bolger is found worrying about the recent attack by the Ringwraiths on Crickhollow, and the broken door and cloak found in the front. Players must then defend Fredegar from enemy Crebain that descend to attack.