The Dagor Aglareb, the "Glorious Battle", was the third battle of the Wars of Beleriand, fought between the Noldor and the forces of Morgoth.

Before the Sun and Moon Morgoth had returned to Middle-earth after serving his imprisonment in Aman. From Angband he launched his invasion on the Sindar living in Beleriand. The Sindar suffered heavy losses and were forced back deeper into their lands and for a time the Orcs roamed unmolested in Beleriand.[2]

The return of the Noldor to Middle-earth changed this, Fëanor and his followers fought against the Orcs of Morgoth in the Dagor-nuin-Giliath[3] and were victorious however the battle resulted in the death of their leader Fëanor. Afterwards Fingolfin's host arrived in Middle-earth with the first rising of the Moon and later the Sun, the Orcs cowered as they feared this new light and retreated back to the caves of Angband. In this time Fingon rescued his cousin Maedhros from Thangorodrim.[3]

During the sixty years following Dagor-nuin-Giliath, the Noldor established their foothold in Middle-earth as well as making contact with the Sindar living in Beleriand. Morgoth was informed from his spies that the Noldor were more busy with domestic affairs rather than martial vigilance and were not prepared for war. Morgoth chose this time to strike, the Ered Engrin spewed forth fire and Orcs poured from Angband across Ard-galen. The main host of the Orcs assaulted the highlands of Dorthonion while parts of the host passed through the Pass of Sirion in the west and Maglor's Gap in the east.[3]

The reports of the spies were wrong and the Noldor were more vigilant than first thought. Soon armies under Fingolfin and Maedhros counter-attacked from both east and west on the host at Dorthonion and the Orc host was caught between the hammer and anvil of the two Elven forces, with most of the Orcs being destroyed, and the remnant retreating towards Angband. The Noldor pursued them, and utterly destroyed what remained of their enemies within sight of the peaks of Thangorodrim. The bands of Orcs that broke off from the larger host and strayed into West and East Beleriand were destroyed by other Elven forces.[3] 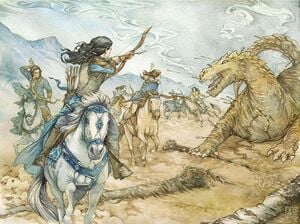 Then Fingon rose against him by Jenny Dolfen

The Noldor, having been reminded of their ever-present danger, tightened their leaguer but they were unable to completely encircle Angband in the north as the Iron Mountains proved impassable because of the snow and ice. This was the beginning of the Siege of Angband, which lasted almost four hundred years. Only scattered incidents broke this time of peace.[3]

After ninety-five years,[4] Morgoth sent an army of Orcs to the north, turning west then south to Lammoth and they passed through the Firth of Drengist hoping to catch Fingolfin unawares by approaching his realm from the west. However the Noldor were aware of this army and was quickly defeated by a force led by Fingon. Morgoth then perceived that the Orcs unaided could not defeat the Noldor, save in numbers, and so devised new evils.[3]

A century later, Glaurung, then only a half-grown dragon, drove the Elves to the protection of the highlands, but he was forced to retreat from Ard-galen by the archers of Fingon.

Morgoth ceased open assaults and during the Long Peace he employed his powers instead through stealth, treachery, and enchantment of prisoners.[3]

In the earlier versions Dagor Aglareb was originally the second battle in the Wars of Beleriand.[7]