Difference between revisions of "Dagor Bragollach"

The Dagor Bragollach (Sindarin for "Battle of Sudden Flame") was the fourth great battle of the Wars of Beleriand, fought between the forces of Morgoth and the leaguer of the Noldor.

After the Dagor Aglareb, where Morgoth was defeated by the Noldor, the Siege of Angband was established.[2] For about four hundred years there was relative peace in Beleriand, the Elves built their cities and strongholds across the land and they were strengthened by the coming of Men to Beleriand.[3]

In F.A. 422 Fingolfin pondered for a new assault upon Angband[4] as the Noldor did not wholly defeat Morgoth but contain him in his stronghold and the threat of another deadly assault was ever-present in the mind of the king. Angrod and Aegnor were like-minded but most of the Noldor, especially the Sons of Fëanor, were content with the state of affairs and were reluctant to pay the costs such an attack would incur, and they thus did not give much heed to Fingolfin.[5]

Thus Morgoth was left alone to continue building his strength in secret and in F.A. 455 his preparation was complete.

On a winter's night, Morgoth sent out rivers of flame, consuming Ard-galen, which was renamed Anfauglith. Many elves perished as they tried to escape the fire and the confusion caused by the flame and smoke hindered the defenders. Then Morgoth sent forth his armies, led by Glaurung first of the Urulóki, and behind him Balrogs and multitudes of Orcs and they slaughtered anyone they came across.[5] 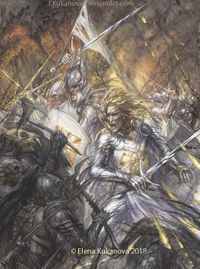 The highlands of Dorthonion bore much of the assault and were overrun. Angrod and Aegnor were slain and many of Bëor's folk fell including their lord Bregolas. King Finrod Felagund came north from Nargothrond with an army however they were defeated and Finrod with a small company was surrounded at the Fen of Serech. Finrod would have been killed or captured but was saved by a sortie led by Barahir, brother of Bregolas, who was fighting in western Dorthonion near the Pass of Sirion. They managed to cut through with great loss and Finrod and his folk fled south to Nargothrond, while Barahir continued defending Dorthonion. It was this deed which later earned Barahir the ring of Finrod which would become known as the Ring of Barahir.[5]

In the north-west Fingolfin and Fingon marched with their host to aid the sons of Finrod but they were driven back with great loss to the mountains. Hador, the lord of Dor-lómin, and his younger son Gundor were slain defending the rearguard of their lord Fingolfin. In the mountain fortresses there was a fierce battle between the Orcs and Elves and Men of the North.[5]

The March of Maedhros were assaulted heavily by the armies of Morgoth. The Pass of Aglon were forced by the hosts of Morgoth with great cost and Celegorm and Curufin fled south near Doriath. Maglor's horsemen were overwhelmed on the plain of Lothlann and Maglor's Gap was taken. Glaurung came thither and burnt the land between the arms of Gelion. With the gap taken the Orcs moved south and captured Caranthir's fortress in Mount Rerir, Thargelion was ravaged and Lake Helevorn was defiled. Maglor fled to Himring while Caranthir fled south with Amrod and Amras to Amon Ereb. The Orcs did not come into Taur-im-Duinath or Ossiriand. Maedhros fought valiantly against the Orcs with the help of Maglor and Morgoth was unable to take the fortress on Himring.[5]

Thus the siege was broken and the forces of Morgoth were now able to roam at will throughout the north. However he did not completely destroy his foes.

The refugees of Dorthonion fled to Hithlum and Himring but a few folk of Barahir remained, fought foot by foot for their lands, refusing to retreat from the attacking forces, and Morgoth relentlessly pursued them to the death until very few remained.[5] So great was his wrath against them that Dorthonion was turned into a twisted land of dread and such dark enchantment that even Orcs would not enter it unless need drove them.[6]

Fingolfin and Fingon managed to defeat the Orcs attacking Barad Eithel and Hithlum was safe. However most of the Grey-elves forsook the northern war and fled south to Doriath, Nargothrond, Falas and Ossiriand.[5]

The sons of Fëanor were scattered and driven from their lands save for Maedhros who still held Himring. Celegorm and Curufin travelled to Nargothrond after being defeated in the Pass of Aglon.

The fall of Fingolfin 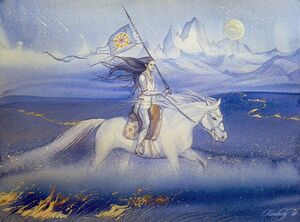 After a year of fighting,[7] when Fingolfin, the High King of the Noldor, saw what he believed to be the utter ruin of the Noldor, he rode in anger across the dust of Anfauglith and challenged Morgoth to single combat. At the doors of Angband itself, they fought a great duel. Fingolfin's sword, Ringil, wounded Morgoth seven times. Yet he was felled by Morgoth's hammer, Grond, and crushed by Morgoth's mighty foot. Fingolfin's body was saved by Thorondor King of Eagles and brought into the mountaintops north of Gondolin. There Turgon his son built a cairn over his body.[5]

The earliest concept of the battle appears in the unfinished poem The Lay of Leithian, even though brief some elements of it remain in later writings such as Barahir saving Felagund and the deaths of Angrod and Egnor (Aegnor).[9] In the Sketch of the Mythology where Tolkien started to piece together the legends, the battle appears here but very brief as well. However Christopher commented that the new material that appears in later writings might have already been in the mind of his father when he wrote the Sketch.[10]

In the Quenta Noldorinwa there is a huge expansion of material in this version compared to the Sketch, of which many elements appear in The Silmarillion.[11] Moreover it was originally labelled as the second battle but was later changed to the third battle in the Wars of Beleriand, partly due to the inclusion of the Dagor Aglareb as the second battle.[12]