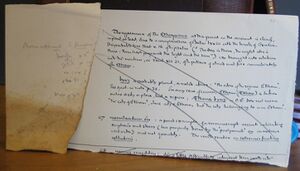 "The appearance of the _Ethiopians_ at this point in the account is clearly, in part at least, due to a comparison of Psalm lxxiii with the book of Exodus. It is probable too that v. 16 of the psalm ("The day is thine, the night also is thine: thou hast prepared the light and the sun") was brought into relation with the mention, in Exod. xiii 21, of the pillars of cloud and fire immediately after _Etham_.

_byrig_ is probably plural, as noted above: 'the cities of the region of Etham'. See quot. in note p. 32. In any case, of course, _Etham_ (_Æthan_) is taken not as a city or place, but a region; _Æthanes byrig_ in O.E. does not mean 'the city of Etham', where city = Etham, but 'the city belonging to or in Etham'.

67 _mearelandum ón_ : a good example of a manuscript accent indicating emphasis and stress (here properly borne by the 'postponed' _on_ in archaic word order) and not quantity. The words render _in extremis finibus solitudinis_. [Vulgate Exodus 13:20]

68 _nearwe genyddon_ : it is a little difficult to interpret these words with"