Difference between revisions of "Downfall of Númenor"

During the early years of the Second Age, Morgoth's greatest servant Sauron, had grown mighty in Middle-earth, ruling through terror, force, and persuasion, Sauron dominated the peoples of Middle-earth in the south and east. After the forging of the One Ring Sauron launched an invasion of Eriador and destroyed Eregion. Númenor dispatched an immense military force to Middle-earth to aid the Elves of Lindon and after a period of heavy fighting, defeated Sauron and his hosts.[2]

Sauron returned to Mordor to rebuild his strength and having tasted the power of conquest and victory in arms, the Númenóreans began establishing settlements along the coasts and oppressed the Men of Middle-earth. Many began to speak openly of their envy of the Eldar's immortality and in defiance of the Ban. It appeared to the Valar that the shadow of Morgoth had returned to plague their hearts. Emissaries of the Valar came to Númenor, seeking to remind them that death was not given as a punishment but the people of Númenor did not heed their words and later became split into two factions; the King's Men, those loyal to the King and prone to oppose the restraints upon Númenor, and the Faithful, those who remained true to their friendship with the Eldar and loyalty to the Valar. As time went on, Númenor continued to grow in wealth and might, yet somehow its people's bliss was diminished.[2] 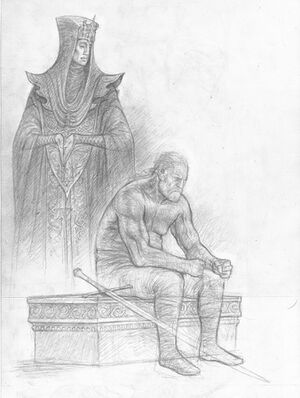 After returning to the height of his power, Sauron began attacking Númenórean cities by the coasts and took on the titles 'Lord of the Earth' and 'King of Men'. Ar-Pharazôn the King, received word of his rise in power angered by Sauron's pride the Númenóreans swiftly came once more to Middle-earth with a great military force to confront Sauron a final time. So mighty were they that Sauron's forces fled from them with barely a fight. Sauron realising he could not defeat the Númenóreans militarily allowed himself to be captured, and begged falsely for mercy. The Númenóreans brought him back as a prisoner.[2]

Through Sauron's cunning and persuasion he rose from prisoner to adviser for the King, convincing many officials to worship Morgoth, they quickly became corrupted to his side. Under Sauron's influence the Númenóreans prospered but became more nefarious, the Men of Middle-earth were hunted and enslaved and brought back to their temples to be slain cruelly. The White tree Nimloth was cut down and its wood was used to light the first fire on the altar of a mighty temple built in Armenelos. Recognising the corruption of the council Amandil, the lord of Andúnië, withdrew to Rómenna summoning more of the Faithful to follow him.[2]

The shadow of death soon loomed over Ar-Pharazôn and fearing death and old age the king was prompted by Sauron to make war upon the Valar, seize the Undying Lands and take immortality by force and so preparations began in S.A. 3310 of a great armada for the invasion.[3] Amandil was aware of the king's machinations and called his son Elendil revealing his plan to sail west in secret, imitating their forefather Eärendil, and seek mercy from the Valar for what was to come, as Amandil perceived there was no turning back from the Númenórean's course of war and anticipated their ruin. Amandil then departed along with three servants he held close, sailing east then going about towards the west and was never seen or heard of again. Following the advice of his father Elendil prepared for the ruin of Númenor, gathering more of the Faithful and prepared their ships that were anchored in the east coast, storing their heirlooms and goods.[2] 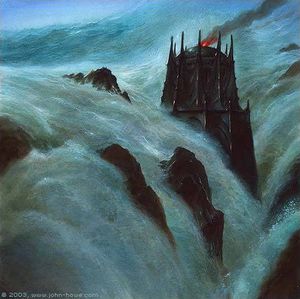 The Drowing of Númenor by John Howe

During these days the weather in Númenor grew restless, the skies darkened, and the storms wrecked the ships of the Númenóreans. Then a great cloud shaped as an eagle loomed over the island and beneath its wings lightning struck the land. Few of the Númenóreans repented but many defied the warning and Sauron stood in the Temple and was unscathed from the lightning. In 3319, Ar-Pharazôn's armada was complete,[3] known as the Great Armament, Ar-Pharazôn boarded his flagship Alcarondas ahead of his fleet and departed for Aman. Sauron remained behind. The fleet finally arrived on the shores of Aman and Ar-Pharazôn's host made their camp about Túna.[2]

The Valar feared that the Númenorean army could wreak havoc in Valinor,[4] but they were forbidden from killing or otherwise using force against Men.[5][6] Manwë, chief of the Valar, thus called upon Ilúvatar, who opened a massive chasm in the sea between Númenor and Aman which swallowed the ships in the Great Armament of Ar-Pharazôn. Ar-Pharazon himself, along with his host that had landed on Aman, was 'buried under falling hills' and would remain in the Caves of the Forgotten until the Last Battle. Númenor was covered by great waves and sank into the abyss, killing its inhabitants, including the body of Sauron, which robbed him his ability to assume fair and charming forms. Ilúvatar broke and changed the world, changing Arda's shape from flat to round and taking Aman and Tol Eressëa from the Circles of the World forever, so that mortal sailors would not reach the Undying Lands again.[2]

The Faithful managed to escape the catastrophe, led by Elendil and his two sons Isildur and Anárion they fled Númenor on nine ships. Among their possessions were the Palantíri, the Ring of Barahir, a silver rod, Narsil and a scion of Nimloth which grew from a fruit Isildur saved before the tree was cut down. They landed in Middle-earth, but due to the upheaval caused by the destruction of Númenor their ships were separated, Elendil landed in Lindon while Isildur and Anárion were borne to the south. The followers of Elendil united the colonists who were in the settlements of those lands among the Middle Men and established two kingdoms which came to be known as the Realms in Exile: Gondor in the south, and Arnor in the north.[7] The few Númenóreans endeavoured to preserve the culture of Númenor in their new kingdoms, Adûnaic the language of Númenor, was used in the realms (even before the Downfall) and later it evolved into Westron or the Common Speech, burrowing some words from Elvish.[8] The sadness and the shock from the loss of their island home always remained in the hearts of the Númenóreans and their descendants.[2]

Other Númenóreans survived that were of the King's Men, they were already in Middle-earth before the Downfall and established other realms in exile to the south; of these the Haven of Umbar was the chief and continued to reign the lands there. They later became known as the Black Númenóreans[9] and continued to serve Sauron, whom had also survived the Downfall, although greatly diminished and bereft of shape returned to Middle-earth with the One Ring to continue troubling its inhabitants.[2]

New lands formed in the West to replace the absence of Aman; islands rose and hills were formed. The coastline of Middle-earth also felt the effects of the cataclysm. In some places the coasts retreated, and in others they had advanced. Lindon in particular suffered great loss from the advance of the coasts, whereas the coasts had retreated to the east and south of the Bay of Belfalas, putting Pelargir much further inland than it had been and nearly destroying Tolfalas. As the Anduin found new courses along the new coasts, the Ethir Anduin formed.[10]

The manner of Sauron's arrival to Númenor took different forms in earlier versions of the story. In The Fall of Númenor, Sȗr (an earlier name for Sauron) came to Númenor in the 'likeness of a great bird' and preached the return of Morgoth.[11] In a later version, the King of Númenor sends ships to Middle-earth after hearing the rise of Sauron and summons him to do homage.[12] The element of the king sending an armed host appears later in The Drowning of Anadûnê where he smithies weapons of war.[13] This would later be expanded to what closely resembles what is in the Akallabêth.[14]

In earlier versions of the story Ar-Pharazôn did not set foot on Aman with his army, instead he remained aboard his ship along with his queen Istar (an earlier name of Tar-Míriel) and both perished when the sea swallowed the fleet.[15][16] This was also the only instance in the texts that mentions Tar-Míriel accompanying Ar-Pharazôn to Aman, whereas in later writings she remained on the island.