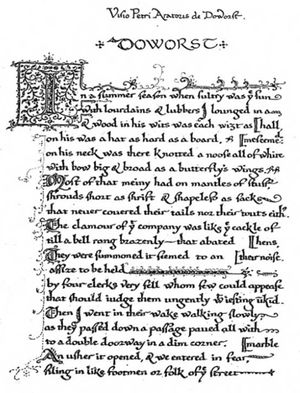 Doworst is a humorous poem written by J.R.R. Tolkien.

The poem, written in a medieval style reminding of Piers Plowman, was given by Tolkien to R.W. Chambers in December 1933. Eventually, the decorated manuscript containing the poem came into the possession of Arthur Brown, Professor of English at Monash University in Australia.[1]

Two publications related to the Monash University have reproduced parts of the manuscript:

In a summer season when sultry was the sun
with lourdains and lubbers I lounged in a hall,
and wood in his wits was each wight as meseemed:
on his [head] was a hat as hard as a board,
on his neck was there knotted a noose all of white
with bow big and broad as a butterfly's wings.
Most of that meiny had on mantles of stuff,
shrouds short as shrift and shapeless as sacks
that never covered their tails nor their touts either.
The clamour of that company was like the cackle of hens,
till a bell rang brazenly — that abated their noise.
They were summoned it seemed to an assize to be held
by four clerks very fell whom few could appease
that should judge them ungently with jesting unkind.
Then I went in their wake walking slowly,
as they passed down a passage paved all with marble
to a double doorway in a dim corner.
An usher it opened, and we entered in fear,
filing in like footmen or folk of the street.