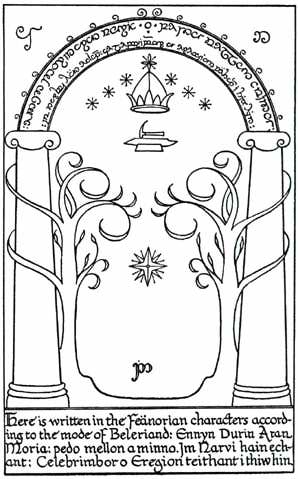 Durin's Crown on the Doors of Durin

"He stooped and looked in Mirrormere
And saw a crown of stars appear"
― Gimli singing the Song of Durin in Moria.[1]

Durin's Crown a constellation of Seven Stars mentioned in the lore of the Dwarves. According to the legend, it appeared as a crown above Durin's reflection in Mirrormere despite the fact it was day; he saw it as a good omen and built Khazad-dûm in the valley of Azanulbizar. Durin's Stone was set to commemorate the location and the event.

Steve Gardner concluded that it could also have been Auriga or the Northern Crown.[3]

Since the constellation was a miraculous event, it's also possible that its stars were only a vision, and not an actual constellation set on menel.