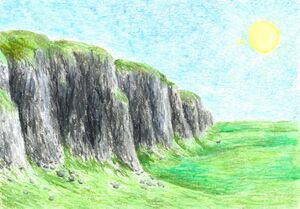 The East Wall of Rohan was the western edge of the hills of the Emyn Muil where they met the grasslands of Eastemnet. The line of the hills ended abruptly in a steep cliff-face, forming one of the boundaries of Rohan. The cliff was not impassable: a traveller in the hills could pass down onto the plain using a ravine that cut into the rock.[1]

This was the route used during the War of the Ring by the Orcs that captured Merry and Pippin (on 27 February T.A. 3019), and by the Three Hunters who followed them at dawn the next day.[2]